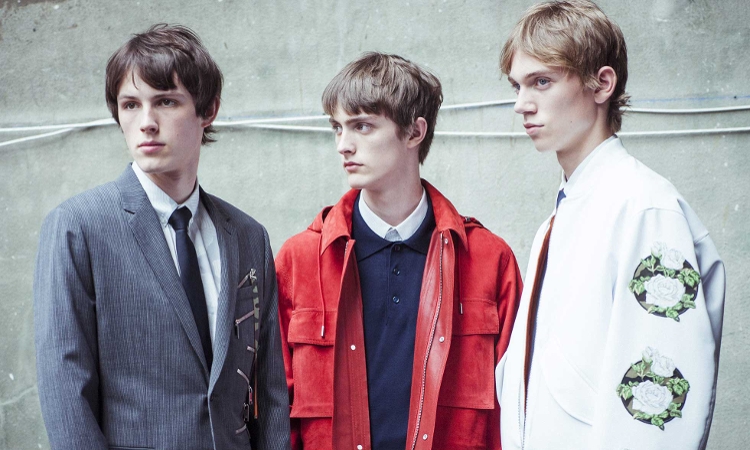 And amidst all this white-flowering vegetation was where the Dior man laid out his new attitude. "The French spirit of both the House and Monsieur Dior and all that symbolizes is present. At the same time, the collection is an exploration of sportswear, from its origins to its current incarnations,” explains Kris Van Assche, Creative Director of Dior Homme.

Color, that all-important element to Christian Dior, provided one of this summer 2016 collection’s starting points. Reworked and contrasted, it appears in primary and botanical shades that echo the work of the American ceramicist Kristin McKirdy. The artist had also devised curving and strongly hued ceramic sculptures for the models to wear as lucky charms, around the neck or in the hand. Like kinetic works, these talismans catch the eye with hypnotic effect.

The color becomes a language of its own, like letters from a colorful alphabet used to reexamine and reappropriate menswear. On the one side, there’s the impeccable cut of midnight blue or gray suits worn over a timeless sky blue shirt, the classicism of a coat, the refinement of a belt with a stylized CD buckle.

And on the other, there’s casual sportswear. The look loosened up as the show collection unfolded. Camouflage, as a military motif given a street feel, appeared on jeans and a shirt but also inside a suit jacket, a parka, or as a subtle touch when on a malt leather travel bag. This style belongs to a young urban man who reshuffles the menswear codes in order to modernize them, as strong pieces are mixed together to create a new silhouette: a traditionally-cut coat reappears in yellow ostrich skin, the classics are revisited in crocodile as a long navy blue double-breasted jacket, or a blue blazer opening to reveal an orange interior referencing a bomber blouson.

"I like to question the codes of the menswear vocabulary," says Kris Van Assche. "In this collection, they are all somehow connected to a tradition of their own. Their juxtaposition and layering creates a tension that’s the essence of contemporary elegance. "

More in this category: « Alzoli presents new Spring 2015 Collection Alzoli made - Silk Scarves Made in the UK: Burberry ‘strait-laced’ menswear collection celebrates best of British craftsmanship »
back to top
ClarkLuxCity.com