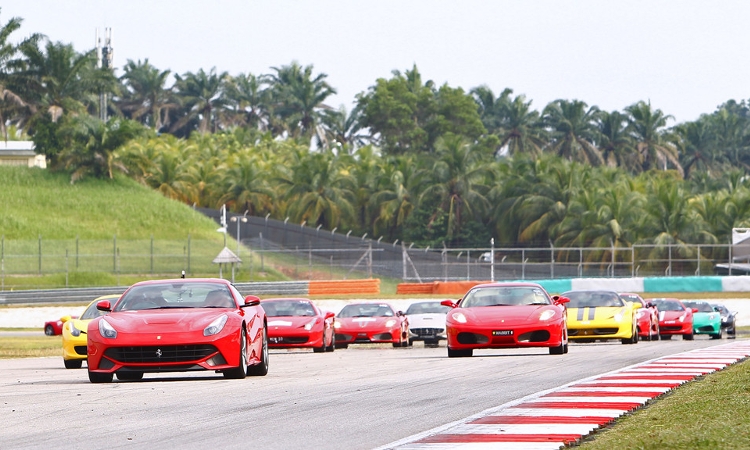 Today marks the final day of the Ferrari Southeast Asia (FSEA) Grand Tour 2015. The convoy left the Shangri-La Hotel Kuala Lumpur this morning while a crowd of Ferraristi and onlookers lined the streets to bid farewell. Everyone excitedly took photos and videos of each Ferrari exiting the hotel. During the drive back along the North-South highway, the participants took short refueling breaks and rested at the Sungei Besi and Pagoh rest areas.

The Ferrari owners arrived at Fullerton Bay Hotel Singapore after half a day of driving under bright blue skies. Tens of Ferraris of different models lined up along the hotel’s driveway and once again caught the attention of Singaporean onlookers who rushed to take photos in front of the Prancing Horse cars against the backdrop of the famous Marina Bay Sands.

As evening fell, the participants gathered for a gala dinner at one of Singapore’s iconic restaurants, the Clifford Pier at the Fullerton Bay Hotel, to mark the closure of the whole event. The Ferrari owners from Singapore, Indonesia and Malaysia have become closer friends and vowed to organize more drives together in this region to strengthen the already solid ties that exist among them. The experience of driving together through Malaysia and Singapore is yet another milestone event that enhances their shared passion for Ferrari.

Day 3 – Experiencing the Excitement of Driving on Malaysia’s Highlands

Kuala Lumpur, May 30 – Day 3 of the Ferrari Southeast Asia Grand Tour 2015 got underway today. After the previous day’s action on the track, the participants were excited to drive their Prancing Horse cars through the mountainous roads of one of Malaysia’s famous highlands: Bukit Tinggi.

After a morning briefing session, the participants began their journey along the highway from Kuala Lumpur and had the chance to test their driving skills maneuvering their Ferraris through the winding uphill roads, all the while feasting with their eyes on a carpet of green tropical forest. The effort of mastering this challenging road was rewarded by the beautiful scenery that greeted them as they arrived at Bukit Tinggi, located 2,500 feet above sea level on 80 acres of natural forestland. Colmar Castle, a building inspired by 16th century French architecture, became the highlight of the trip. The participants smiled as they posed for photos with their Prancing Horse racers parked in front of the graceful and beautiful building.

After lunch, the participants drove their Ferraris through the main town on their way back to the Shangri-La Hotel in Kuala Lumpur and this generated a lot of excitement with the visitors of the resort town.

In the evening, the Ferrari owners were joined by participants from Thailand and the Philippines, who flew in especially for the event, at a beautiful restaurant set against the backdrop of Kuala Lumpur’s most desirable skyline, the majestic Twin Towers soaring into the sky. A special charity auction was also organized to raise funds in support of children with special needs, through the Special Olympics organization. During dinner, the competitors who recorded the 3 fastest lap times during the “Time Attack” session at Sepang International Circuit yesterday were also announced. The winner with the fastest lap time was Kenneth Teh from Malaysia, followed by Abu Bakar Fikri, also from Malaysia, and Gregory Teo from Singapore. Congratulations to the top three finishers!

This was surely a most fitting end to a day of enjoyable driving through winding mountainous roads set against beautiful scenery which certainly left a memory to be cherished by the participants in the first Ferrari Southeast Asia Grand Tour 2015.

Day 2 – Rising to the challenge at Sepang Circuit

Sepang, Malaysia, May 29, 2015 – The second day of the Ferrari Southeast Asia Grand Tour 2015 was an exciting one for the participants from Singapore, Indonesia and Malaysia, with several interesting track activities that pumped up the adrenaline at Sepang International Circuit.

The participants again left the Shangri-La Hotel in Kuala Lumpur at dawn and drove to the circuit. The track event started with the Owners Parade, which saw around 100 Ferraris take a spectacular lap of honour around Sepang International Circuit. After the parade, Ferrari owners were thrilled to welcome the highly regarded Corso Pilota programme that allowed guests to put their driving techniques and skills to the test on race tracks and to experience the full potential of their cars. Supported by professional drivers, the “Pilota Around the World” is a point of entry to the official Corso Pilota course in Italy. There were also other interesting activities on the circuit. The Ferrari owners from the three neighbouring countries could drive their Prancing Horses like professional racers in activities such as Open Track, where they had to overcome the challenges faced at every turn of the Sepang Circuit, as well as Hot Laps with a Ferrari GT3 driver.

The second day ended with a dinner organised for all the tour participants at Shang Palace, the Shangri-La Hotel restaurant. The participants looked very pleased as they shared their stories and experiences of driving around the F1 circuit.

Day 1 – The Tour Starts from Singapore

May 28, 2015 – The Ferrari Southeast Asia Grand Tour 2015 got underway today from Singapore. Around 60 Ferrari owners from Indonesia and Singapore set out separately from 2 different locations at daybreak this morning and converged after crossing the Singapore-Malaysia border to meet their Malaysian friends. Greeted by bright blue skies, Ferrari owners enjoyed driving up north along the North-South Expressway towards Nilai. Throughout the more than 300km expressway, the fleet of Prancing Horse cars made a spectacular sight for the crowds of enthusiasts and other road users.