The Ultimate Luxury Bears No Logo But Your Own 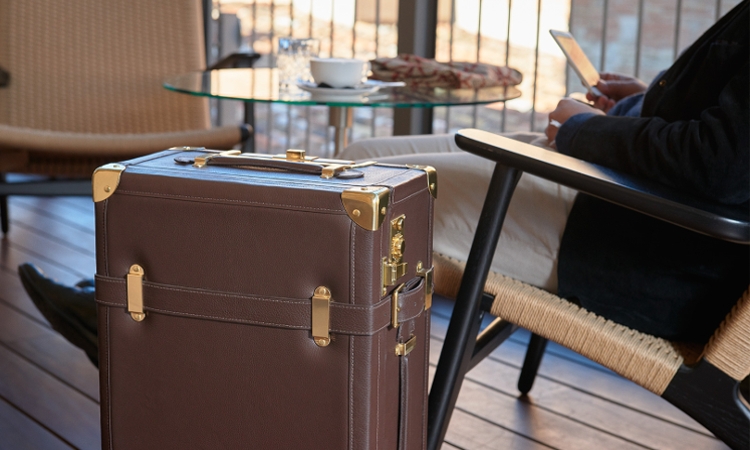 The landscape of luxury is changing. And the role of brands as indicator and arbiter of refined taste is changing along with it.Luxury brands used to be all about exclusivity. These brands were notoriously expensive and not available everywhere. They were the privilege of the fortunate few who had the international insight to know what to buy and the money to spend, even if that meant travelling to Italy to purchase the right shoes or France to find the right handbag.

The exclusivity of luxury brands is changing, though, and there are two reasons for that. First, the number of affluent folks is on the rise worldwide. Second, the Internet and our globalized economy make luxury brands increasingly available to many more people. Look up your nearest Louis Vuitton boutique and you might be surprised by its proximity to you. Or simply go online and it makes little difference if your home is in Paris or Peoria: overnight shipping brings high-end brands into more homes than ever before.

BRAND RECOGNIZABILITY IS A TWO-WAY STREET. CAN WE NAVIGATE WITHOUT THE LOGOS?

Even when branding was something cattle raisers used to identify their steer, brands were all about recognizibility. But whereas branded cattle were meant to be recognized as the property of a given rancher, modern brands—including luxury brands—take on another meaning.

In the commerce between corporations and consumers, brands can be a symbolic shorthand for a certain set of features and values that make it easier to choose between competing possibilities. Buy an iPhone, and you know you’re buying in to the Apple ecosystem and all it represents in terms of usability, design and quality. Purchase a Samsung, and you’re buying into their smartphone universe and the Android alternative.

Recognizable brands serve a purpose. They help consumers choose between many distinguishable options: you might prefer Apple to Samsung for phones, for example, but Samsung to Sony for TVs.

Recognizibility is often due to more than the product’s distinctive features. Oftentimes, what makes a brand recognizable is simply its logo. What is a Louis Vuitton bag without the brand’s famous monogram? How many of us would recognize that briefcase as gorgeous without the Hèrmes “H”? And if you took the polo player off a Ralph Lauren shirt, would you really pay the same price for it?

As consumers, we also use branded goods to make ourselves recognizable: I’m the kind of guy who wears Tommy Hilfiger, Paul Smith, Levis, Lee…They’re all jeans and they all do an excellent job of covering our legs, but both the wearer and the observer see more than just the denim.

The brand choices we make also say something about us. They can be expressions of personal identity. It may not exactly parse out your persona like a kind of psychoanalysis, but it does illuminate what you value in a brand—luxury or not.

Logos do more than set one brand apart from another. The badge of a brand can admit you to an in-group or alienate you from it. Take, for example, Abercrombie & Fitch. Emblazoned with its easily recognizable (and previously enormous) logo, the brand was once all the rage among suburban middle schoolers. The logo itself helped usher in and fortify social conformism in places where it was most popular, demarcating affluent popular kids from the less fortunate. In later years, though, the brand noticed its sales dwindling, and after careful research, A&F realized that kids in their sweet spot demographic had begun to value being different more than belonging and conforming. Today’s products from the brand bear virtually no visible logo as a result.

In the mass market, powerful brands have excellent distribution and are widely available. Coke, arguably the strongest brand on the planet, is famous for being “within an arm’s length of desire” and does a pretty good job of it as you may have noticed on your last trips to London, Lagos or practically anywhere else.

Bang & Olufsen, the Danish maker of high-end TVs and sound systems, on the other hand, has been through a number of grinding court cases to make its brand less accessible. It tries to limit distribution to fewer rather than more outlets.

The difference here is that Coke is marketed to appeal to the masses and a combination of demographics; this is telling about its status as a luxury product (it’s not one). Bang & Olufsen, however, takes a different approach to the laws of supply and demand: by deliberately decreasing its availability, it intends to increase the brand’s cachet. As any precious metal trader knows, obtaining something that’s in short supply —something exclusive by nature— is more expensive than procuring something that is “within an arm’s length of desire” for the masses. For luxury brands that want to grow, this can create some delicate dilemmas.

AS A LUXURY BRANDS RISES, SO FALLS ITS UNIQUENESS

When exclusive brands develop into highly accessible brands they become, well, less exclusive. What does this mean for luxury brands?

Take Louis Vuitton for example. The company has clearly done an amazing job in building one of the world’s top luxury brands, and in striking a profitable balance between mass appeal and limited distribution.

Still, more than 85% of Japanese women now own a Louis Vuitton product. Many own five or more handbags with the LV logo. In today’s Japan, it’s still a luxury brand, but as it becomes more and more accessible, will the essence of its luxury become diluted? Is it possible to imagine a scenario in which Louis Vuitton in Japan, like Abercrombie & Fitch in US suburbs, becomes so popular that its owners seem more conformist than trendsetter?

IN THE BEGINNING WAS THE BRAND. IS THERE LIFE AFTER LOGOS?

People are beginning to reconsider their relationships to brands for a number of reasons.

The Canadian author Naomi Klein kicked off a huge debate with her 1999 bestseller, No Logo. The book became influential in the alter-globalization movement as it pilloried major brands such as Nike and McDonald’s for their colonization of pop culture, elbows-first market dominance and sweatshop production methods.

Whether you agree with Klein’s analysis or not, No Logo has had significant cultural and commercial reverberations. Youths around the world began to question their willingness not only to support these major brands by purchasing their products, but also to advertise for them simply by slipping on a pair of shoes or a sweatshirt.

Apple’s iPhone continues to break sales and profitability records. But how hip is it when both your mom and your grandmother own one? Some say its cool factor is on the wane. Are Android phones more innovative? Or could it have something to do with the iPhone’s massive reach and exposure?

Fashion brands such as Louis Vuitton must deal with another kind of brand burnout. Overexposure is no friend of exclusivity. When one third of your global sales derive from China’s nouveau riche, what does that say about the brand’s cachet in Paris or New York?

DOES REAL LUXURY SHOUT OR WHISPER?

At Wilkens, we see a new luxury trend that has its roots in something as old-fashioned as authenticity. Just as many consumers in general want to know more about where their food comes from and how it was grown or raised, luxury aficionados are also interested in the provenance of their purchases.

Not content to hide behind a logo, real luxury lovers are much more concerned with the intrinsic rather than extrinsic qualities of a product. They want products where design, materials and craftsmanship come together to create something of lasting value rather than a fleeting fashion statement. Often, these luxury experiences are customized to the wishes of the purchaser – and not readily available on any retail shelf.

In our opinion, there is a small but noticeable trend away from the easily accessible and recognizable. Modern luxury is now about small production runs, subtlety, and above all, exclusivity.

Brands shout to get noticed. True luxury only has to whisper.