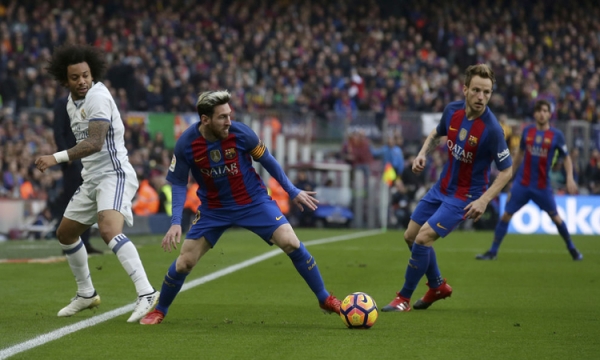 The theorists expected Barcelona to have a scheme 4-3- 3, sending Gerard Deulofeu to the Neymar’s position. But in fact, the Catalans acted 4-4- 2. Deulofeou and Rakitić fired side attacks, and Messi and Suarez acted at the front. The former was often seen in the field’s end. Barcelona started with positional attacks, but quickly rebuilt it on counterattacks. Messi made brilliant passes, but the teammates did not assist him. In general, the first half was not very spectacular. Energetic, tense - yes, but not spectacular.

Real played without Cristiano Ronaldo. Isco a lot and got the status of one of thebest players of the first half. Gareth Bale was good enough as always, although everybody noticed the Welshman to be far from the ideal form.
Kovacic actions were vivid in the field’s center. The Croat didn’t manage to win back the first team’s place last season, but now at last reminded Zidane he was really worth it. The teams did not show a good performance as it was expected for in the first half.
The fun came after the interval as Real started to impose their own tactics. And they were the ones who deserved a goal. Isco connected Marcelo to the attack, the Brazilian shot unexpectedly, and Piqué was not in the right place and bounced back the ball into the net.
Real could score the second time in a while. Benzema squeezed through the Barça defenders easily, assisted Carvajal, however Alba was on the right position before ter Stegen... Actually, the Catalans had a chance before, but Messi did not have time for a low cross.
The hosts got angry. Barcelona advanced on the Real’s goal, but the rivals did sting with counterattacks as the roles had changed. Varane almost repeated the Piqué’s  clearing the ball away after the Suárez low cross. Then Ronaldo tried to make a spectacular goal kick over his head falling down... But later...
Luis Suárez cheated the referee with a fake break off. Messi shot from the penalty area, the ball flew into a free zone. Navas and Suárez rushed after it. Luis got closer to the goalkeeper and collapsed onto the field grass. Young referee Bengoechea awarded a penalty, although Navas did not touch Suárez.
Surely, Messi converted a penalty. But the Real’s revenge was really sweet. A counterattack and Ronaldo passed the ball to Isco with his chest, received a pass in return, moved to the center and shoot a phenomenal goal from the approximately 16 meters. The Portuguese got carried away by the celebration, and received as a result a yellow card for the take off of jersey. This moment was very important.

Ronaldo tried to go on a shooting position later, but did not outplayed Umtiti in the power and speed. After shoulder to shoulder fight with the Frenchman Cristiano fell on the field grass, appealed to the referee and ... finally got another yellow-red card for the simulation. That was a really strange referee’s decision. Thus, emotions spilled out, and Ronaldo allowed himself to push the bewildered referee. It was already an uncontrolled football.
When the passions calmed down a bit, Barcelona went ahead again and ... missed the fatal counterattack. Vázquez started for an attack, passed to Asensio, and Marco shot no worse than Ronaldo. Awesome.

Two different halves. The second filled the void that was formed after the first one. Real deserved the victory, and Barcelona fans can only spread their hands…